Some of the bolts on Parle were starting to show their age, so last month I decided to do some maintenance and replace them. Walking past the hoards on Toix Ost in the afternoon I was confident I'd have the sea cliffs to myself. But no, three groups of two strung out in various stages of fear induced utopia adorned the crag. About time it got re-bolted then. 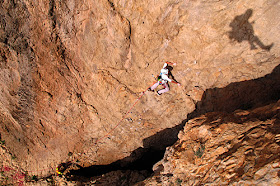 Having just checked my own topo, (I must be getting old) we started work on this section in 2002. Almost fifteen years ago.  Three quarters of the bolts are still in good condition and showing little or no warning signs.
Parle is protected by a series of Fixe stainless steel glue-ins and stainless steel expansion bolts, ten of the expansion bolts were rusting considerably faster than all the other metal work.

A quick spray of WD40 and the first two nuts are removed easily and spites hammered in to the hole. The next few bolts the nuts' edges shear quickly and the nuts are seized. Plan "B" hammering for 15 minutes removes the bolts. Even though the nuts had substantial rust I would have confidence that these bolts would easily stop a fall.

This is the scary bit. Three of the bolts near the base of the crag sheared under the weight of the spanner, these failed at something like 10-20kg! They appeared to be in the same condition as the much stronger bolts.

So what was going on?

Well I don't know for certain but I think some of the spits had been mixed up with non-stainless spits. I am now very careful to avoid cross material storage, and have been for many years. 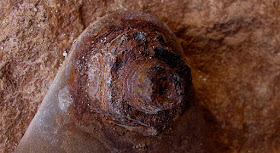 The metal on the spites which were removed by hammer seems dull, evenly coloured and smooth.

The metal on the spits removed under the spanner seems shiny with pressure ridges running away from the centre.

Parle is now safe with all Stainless steel protection. I am seeking further advice and analysis, I will post the findings when I have them.